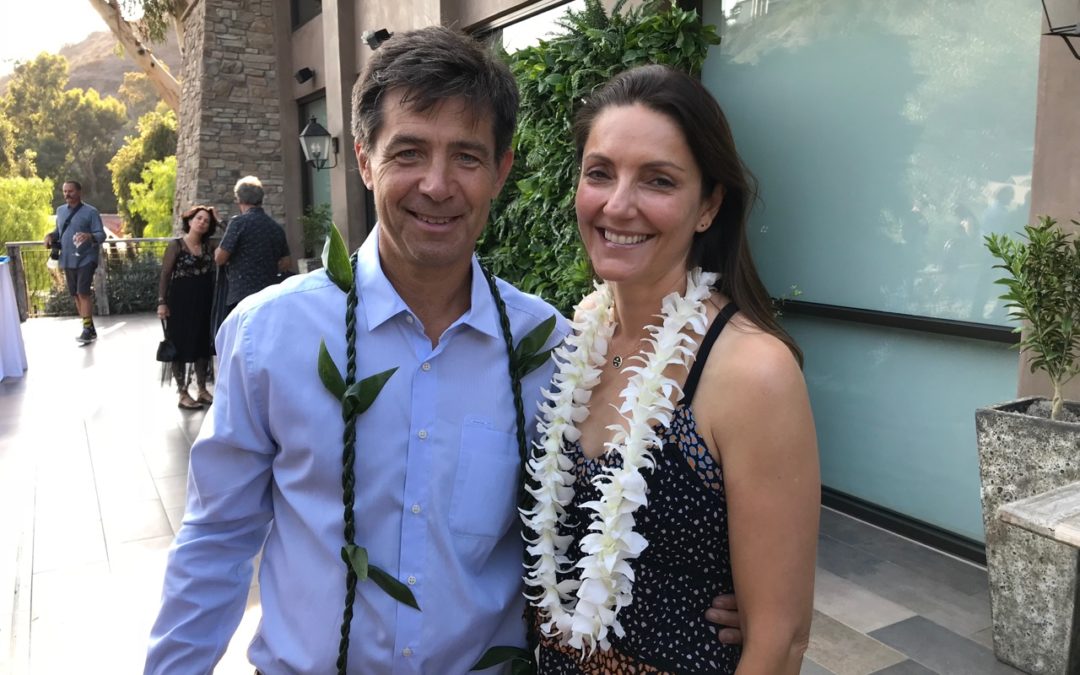 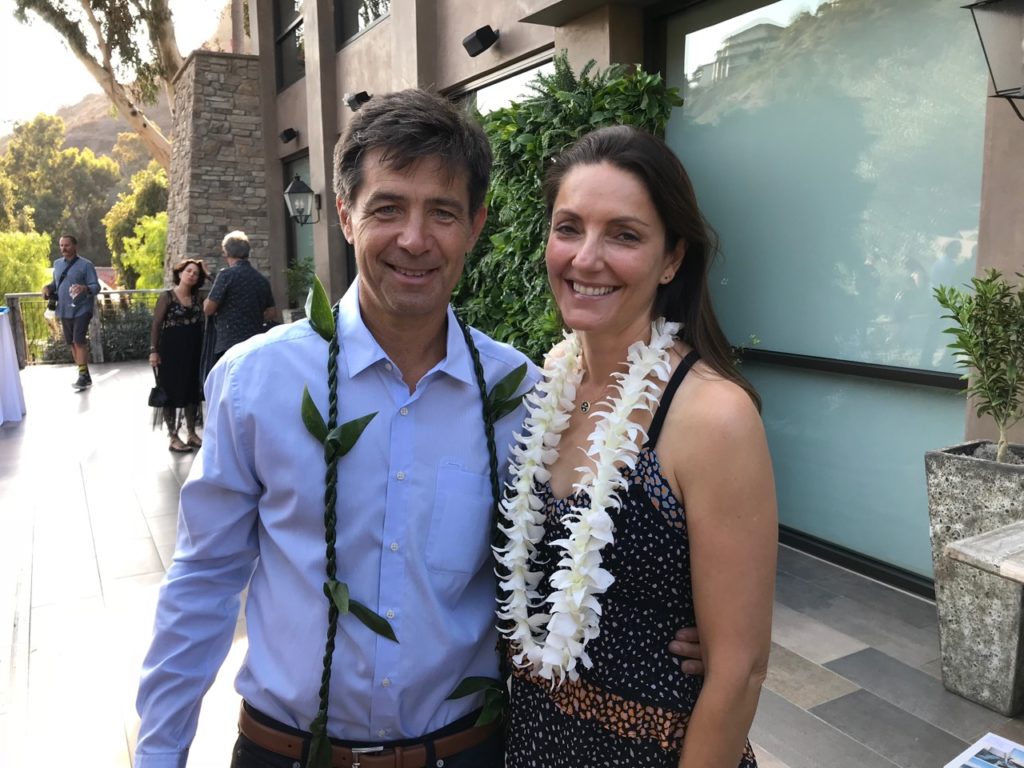 The majority owners of the WSL, Dirk and Natasha Ziff, were honored as Watermen of the Year Saturday night.

The couple, who are billionaires, fell in love with surfing and are passionate about the sport. Clearly, they are uncomfortable with the spotlight. But both gave speeches at the event – the first time they have spoken publicly about their investment in the WSL.

Natasha focused on the athletes, environmental efforts the WSL is making and her quest for parity of pay and surfing conditions at contests for female surfers. Read her whole speech here.

Dirk also spoke about the athletic prowess of professional surfers, and how they deserved to be recognized as some of the best athletes in the world. He also took on WSL haters, and questioned what the people who tear down the WSL on social media are trying to achieve.

Unfortunately, as he was finishing his speech, his microphone was cut off because The Ranch has a strict 10 pm curfew for noise because of neighboring houses.

SES reached out to the WSL to get the final part of speech.

Kelly Slater introduced Dirk, and Kelly emphasized the Ziff’s are committed to the WSL for the long term.

Here is the transcript of Dirk’s speech, which we recorded.

“It isn’t every day that you are introduced by the person who has put together the single greatest and most dominant career of any athlete, in any competitive sport, anywhere, ever in history. Pretty humbling. And then he decides to transform the future of the sport by imagining, designing, and delivering a magic wave machine. I hope world peace is next on your agenda, buddy, because if anyone can get it done, you can.

“Natasha and I are grateful for this honor, but honestly, it’s also a little awkward for us. We are private people. We have never put our names on anything, and probably never will. Recognition does not motivate us. But surfing motivates us. The amazing men and women athletes of the WSL motivate us. Our partners and colleagues motivate us. And doing things really well motivates us.

“So, we are super motivated to do everything we can to create a successful, vibrant and durable enterprise in the World Surf League, so the athletes of today have the opportunity they deserve to achieve success and recognition, and the groms of today can look forward with confidence, and know that if they work hard, even greater opportunity will be there when their time comes on the world stage.

“For this to be the case, we absolutely have to build a strong, stable, solidly and consistently profitable business. And we are making that happen, with a patient but focused long-term view, led by our fantastic CEO Sophie Goldschmidt.

“But, as anyone ever associated with professional surfing knows, it is a tricky challenge. Waiting for the ocean to deliver exciting conditions has been an obvious issue. So has the culture of free attendance. Fans of other sports know that the broadcast starts at 3 pm on Saturday afternoon, not some time in the next 12 days when the commissioner calls it on.

“And the events take place in ticketed arenas and stadiums. If all competition start times were completely uncertain and attendance was free, I wonder how many sports would be successful today?

“The miraculous ability to become our own broadcast distributor, pushing notifications and streaming live to desktop and mobile devices around the world, was essential to our mission, and we are very proud of how we have delivered for the fans.

“But that is not enough. Events are still longer than most good swells, and multiple lay days can be a killer for audience momentum. Imagine a basketball game that pauses at halftime, and will resume at some unknown point in the next few days. How many fans would remain engaged?

“The event format remains confusing to new fans. Think about it. A surfer can finish second in three separate heats, and still finish second in the overall event. We continue to have an antiquated system for determining world champions, in which all events count the same, and points are simply added up until someone has an insurmountable lead, regardless of when that happens.

“This all too frequently results in confusing scenarios at the end of the season. Many times since we have become involved, the new world champion was sitting on the beach, not even at the last event of the year, hoping for someone else to lose. This is when many fans tune out.

“In 2016, when John John won the title in Portugal, the audience for Pipe was down almost 50%. The title was not on the line. This is not great sporting drama, in my opinion. Just like the thrilling finals of our individual events, I believe our world champions should win the title in the water.

“We will innovate, but we know that brings risk. We entered into our arrangement with Facebook for the same reason we do everything: because we believed it was in the best long- term interest of the sport. There are huge WSL fans at the highest levels of Facebook, and they were very eager to work with us. It is the largest and most powerful media platform in the history of the world, and we are among the very first sports to distribute live on it. And Facebook has been a fantastic partner for our social media group since we got involved with the sport.

“Then, to our surprise and disappointment, despite all assurances and testing, they were simply not ready technically to start broadcasting at J Bay. No question, it was not pretty. Since then, Facebook has been a very good partner. They have fully and humbly admitted to the full extent of their shortcomings, and have dedicated huge resources to making it right going forward. We remain hopeful that great things lie ahead for our partnership. It is certainly far too early to declare it a failure.

“Let’s talk about surfing as a sport. I will happily argue that, in the ocean or in Lemoore, surfing is among the greatest of individual competitive sports. Visually it is second to none. I have literally never encountered anybody in any walk of life who does not react with wide-eyed positivity to video images of our athletes in competition.

“The combination of physical ability, hard-won skill and technique, self-confidence, and on the spot decision making required to be consistently successful in our sport is mind-blowing.

“Do they not deserve to be rewarded for their magic, in a way comparable to the greatest athletes in other sports?

“Not everyone seems to think the answer is yes. It is hard to imagine this happening in other sports but I think we all know that there are strong and vocal elements within the surf culture that question whether the very ideas of competition and profit are compatible with the true spirit of surfing – whether there is a place for the WSL at all.

“Some of you are here in this canyon. Journalists, and other influential voices who unload on social media. I wonder if some of you get up every day and stir the milk into your coffee, thinking about what you can write that day that might humiliate the WSL. It goes way beyond constructive criticism, which we all need and which the WSL frequently deserves, and into the realm of foul spirited attack, which I think we can all agree we have enough of right now in this country.

“I have a message to the haters, and it is simple. Be tough. Call us out. Keep us honest. Tell us what we need to improve.

“But don’t pretend you don’t know that when you go beyond constructive criticism and cynically try to rally negative sentiment towards the WSL, when you try to take us down, you are not just going after us. You are going after Kelly Slater. You are trying to take down Lakey Peterson. You are going after the dreams of Caroline Marks and Griffin Colapinto. You are undermining the hopes of every kid who lives with salt in their hair, dreaming of being a world champion one day.

“And I ask you: Why? It seems pretty obvious that if the WSL keeps growing in popularity, and surfing takes its rightful place among the great and elite competitive sports, everyone connected with our sport, and certainly all the members of SIMA, will prosper, except maybe a few grumpy locals who have to deal with some new faces in the lineup. So…why not work together?

“We thank SIMA for this award, and we share it our partners in the business, Terry Hardy and Jeff Bizzack, and with our colleagues at the WSL. Everyone here is invited to come by WSL headquarters on Bay Street in Santa Monica and have a cup of Dogtown coffee.

“If you stop by, you will see a deeply dedicated and wonderful group of mostly young women and men who are deeply passionate about surfing, and have probably driven to Leo Carillo or County Line and back that morning before work. To our colleagues, we thank you from our hearts for your hard work and belief.

“We sometimes feel like we are working to improve a car while it is going 75 mph down the highway. We have made mistakes and will make more in the future. But I suppose we have also done a few things right. It has been quite a ride, and under Sophie’s leadership, you can expect the next chapter for the WSL to be even more transformative and exciting than this chapter has been. We have big dreams and plans.

“One thing I can promise is that Natasha and I love the sport deeply. We never dreamed of being in this situation with the WSL. But here we are.

“We believe the World Surf League has the power over time to bring positive change to the world, by protecting our precious oceans, and through the universally bonding language of stoke.

“Surfing has changed our lives, as it has changed the lives of everyone in this room, and millions of people around the world.

“Thank you very much.”

See all the photos from the event